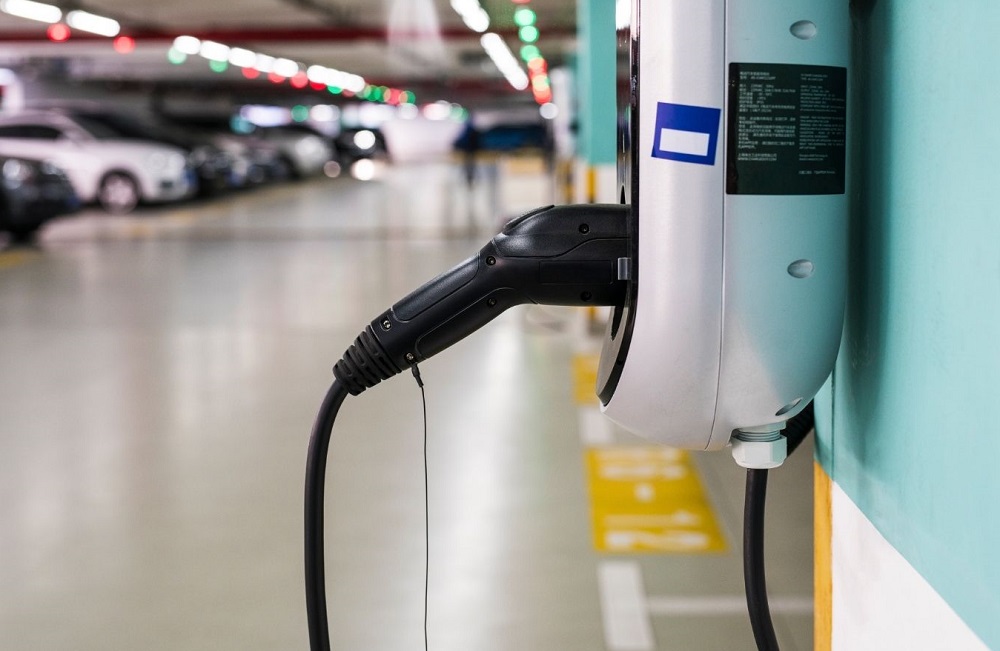 Electric vehicles can be charged at power draws comparable to most household appliances. Most electric vehicles charging at home on a 240-volt level 2 charger will draw about 7,200 watts. That’s 2,800 less watts than a typical electric furnace, and 2,700 watts more than a water heater.

The power draw for an electric vehicle will be limited by either the electric vehicle supply equipment (EVSE), or the vehicle’s onboard charger that limits the rate of electricity a vehicle can handle.

Some owners use only a standard 120-volt household outlet (i.e. Level 1 charging) which will charge vehicles very slowly and has a lower power draw compared to Level 2 charging. Some electric vehicles, like those produced by Tesla, allow for even greater home charging speeds and higher power draws that are similar to an electric furnace.

As we’ve already mentioned, EV chargers are classified into three categories. These are Level 1, Level 2, and Direct Current (DC) fast charging. What makes these chargers different from each other is their input voltage. Level 1 charges use 110-120 volts, Level 2 uses 208-240 volts, and DC fast chargers use 200-600 volts.

Non-networked Level 2 chargers are typically found in single-family residences and MUDs. They may be designed for outdoor or indoor use, and typically produce between 16 and 40 amps of power output, delivering between 14 and 35 miles of electric range every hour they’re charging.

While they serve a similar function as Level 1 chargers, if an electrical permit is going to be pulled to install a circuit for EV charging, it is better to have a 24-volt circuit installed for Level 2 charging.

Non-networked Level 2 chargers are useful for installations at MUDs or commercial sites that are powered by the residents’ or tenants’ subpanels. The electricity used by the chargers will appear on your electricity bill, which gets rid of the need to separately meter the chargers.

When electrical capacity is available, non-networked Level 2 chargers are useful for site hosts that require Level 1 charging but do not have the budget for it.

While networked chargers are sometimes used in single-family residences, you will find them mostly in commercial or workplace settings where payments are required or at MUDs where the property’s electricity bill is split between multiple residents. Like non-networked chargers, they may be designed for both indoor or outdoor use.

Network Level 2 chargers typically produce between 16 and 40 amps of power output (like non-networked chargers), and can deliver between 14 and 35 miles of electric range per hour of charging. Sometimes you can even adjust their power output.

Some of the enhanced features that come with networked chargers are remote access or control via Wi-Fi or cellular connection, the ability to accept multiple forms of payment, and load balancing across multiple chargers and more.

Some models of networked chargers can also limit charging to certain hours, allowing the operator to maximise a ‘time of use’ electricity rate structure, and only allow charging when electricity is at its cheapest. This is usually between 9pm and 6am. Having this kind of control makes it easier to make use of utility demand response programs.

While networked chargers are more expensive than non-networked chargers, they have a lot more functionality and their customization options make them great choices for a workplace, commercial site, or MUD.

DC fast chargers are the most powerful EV chargers on the market. They are often used as range extenders along major travel corridors for long-distance trips and in urban locations to support drivers who can’t make use of home charging, as well as drivers with high mileage.

Most DC fast chargers on the market charge at rates of 25-50 kW. At current charging speeds, they are suited for places where a person would spend 30 minutes to an hour such as restaurants, shopping centers, and recreational areas.

DC fast chargers that are available at the moment require inputs of 480+ volts and 100+ amps (50-60 kW) and can produce a full charge for an electric vehicle with a 100-mile range battery in just over 30 minutes (178 miles of electric drive per hour of charging). However, newer generations of DC fast chargers are getting more popular and can produce 150-350 kW of power.

It’s important to keep in mind that not every EV model is able to make use of DC fast charging, and so cannot be utilized by every driver of an electric vehicle. Also, installations require a commercial electrician from the initial planning phase due to the electric load and the wiring requirements.

DC fast chargers also have multiple standards for connectors, meanwhile there is only common standard for Level 1 and Level 2 charging (SAE J1772). DC fast chargers have three types of connectors. These are CHAdeMO, CCS, or Tesla.