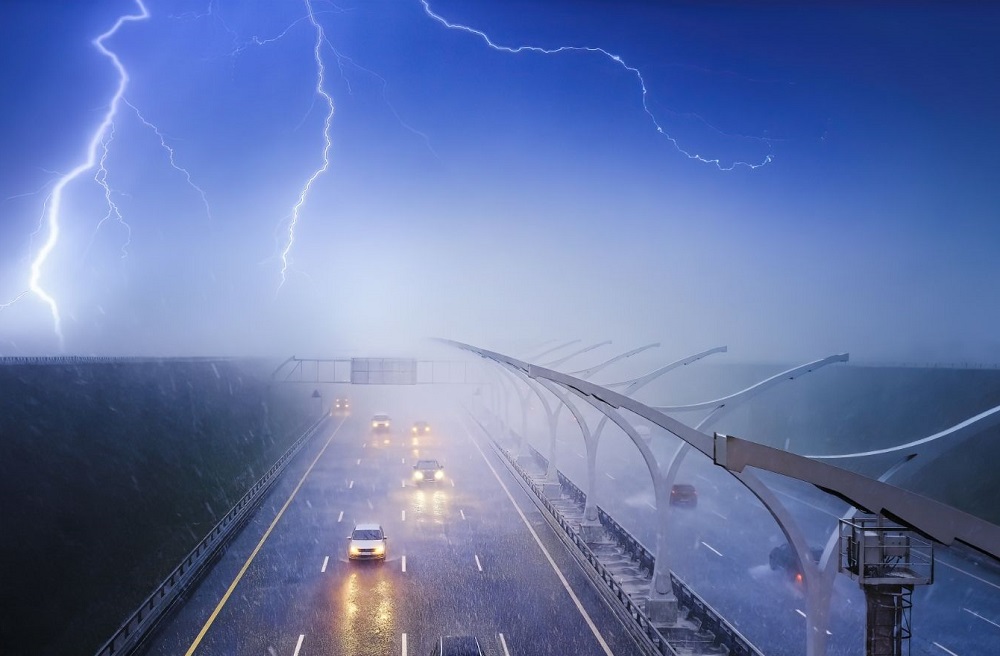 We’ve all had those random 2am thoughts that go along the lines of “if lightning strikes the sea, do all the fish die?”. Those thoughts can go even further if you’re really feeling like freaking yourself out. If an electric car gets struck by lightning, will it explode? Will the driver go up in flames?

Modern technology will always come with rumors and misconceptions, and this is certainly the case for electric cars. With the ever-growing popularity of electric cars, people are bound to be worried about their safety and the safety of the vehicle during a thunderstorm and lightning.

To put it simply, if an electric car is struck by lightning, the car should be safe. However, the answer isn’t as simple as that for every single electric car.

If you’re wondering what happens if an electric car is struck by lightning, here is the answer!

What Happens If An Electric Car Is Struck By Lightning?

It’s no secret that when lightning strikes electricity (such as in a building or a home), it causes a power surge. It’s also no secret that water must not touch an electric appliance.

So, it’s natural for people with electric cars to have concerns about the dangers of owning their vehicle. It’s not just about when driving the vehicle, but is the vehicle safe when it is being charged?

Luckily, the manufacturers of electric cars have designed their vehicles with these concerns in mind. Of course, they won’t sell products that will explode upon impact when hit by rain or potential lightning strikes.

Let’s set the record straight – your electric car is just as safe as any other regular car, which means that if lightning were to hit it, nothing will happen.

This means that you can safely drive around in a thunderstorm or lightning without fear of damaging yourself or your vehicle. Everything is sealed off and waterproofed to perfection, so even in the heaviest of rainstorms, the water won’t affect the electric motor or batteries. Just like with a gasoline car, an electric car will be safe in lightning and rain!

If anything, electric cars might be better suited for excessive rain than gasoline cars. This is because manufacturers take extra care when designing their vehicles to ensure nothing will penetrate through the waterproof layers that protect the electric motor and batteries.

This means that electric cars are far better suited for driving through water than gasoline cars, which usually stall out when driving slightly too fast through water.

What About Charging Your Electric Car During Lightning?

The same rules apply – it’s totally safe to charge your electric car during a lightning or thunderstorm.

Charging ports are designed similarly to electric cars in that everything is almost 100% waterproof and sealed, meaning that you won’t electrocute yourself if the charging port is wet. There also isn’t an increased danger of the car or charging port attracting lightning more than a gasoline car.

So What Exactly Happens When An Electric Car Is Struck By Lightning?

As with any form of electricity and lightning, there is always a risk of the lightning affecting the electricity if it has been struck. This is even the case for electric cars.

In the rarest of circumstances, if an electric car is struck by lightning while it is parked or charging, there is a risk of surge damage. This is something that cannot really be avoided, unless you can choose to keep your car indoors during a lightning storm.

What happens is that the lightning strike can create a power surge through the charging system, which in theory could overwhelm the car battery and electric system.

So, if there is a risk of surge damage, then why have you said that electric cars are just as safe as gasoline cars in a lightning storm?

However, this doesn’t mean that electric cars and charging ports are 100% protected. Any surge system can fail, and this is because these protective systems are only designed to withstand surges of up to 2500 V.

Lightning strikes, however, can be far stronger than that (up to 20 times, in fact), which means that there is always a risk of a lightning strike overpowering even the strongest of surge protection systems.

If you’re driving a car and are somehow unluckily struck by lightning, the same rules apply as the battery and electric motor are equipped with a protective system that prevents surges, which will essentially channel the energy through the car and into the ground.

However, again, this doesn’t mean that these systems are foolproof. If the protective systems cannot handle the strength of the lightning strike, you may experience flickering of lights, but the system should continue to run smoothly. This is because the system is designed to prevent serious damage such as blowouts and fires.

If you have an electric car and you’re concerned about the risk of lightning strikes, we hope that this guide has put your mind at ease. We cannot stress this enough – having an electric car won’t increase your chances of being hit by lightning. In fact, the chances of lightning striking your car (especially when it’s moving) are so small that it’s not even something worth worrying about.

However, you’ve also got to keep in mind that even with the powerful surge protective systems in charging ports and the car’s motor and battery, these systems aren’t 100% foolproof. Still, the chances of anything bad happening are very small.