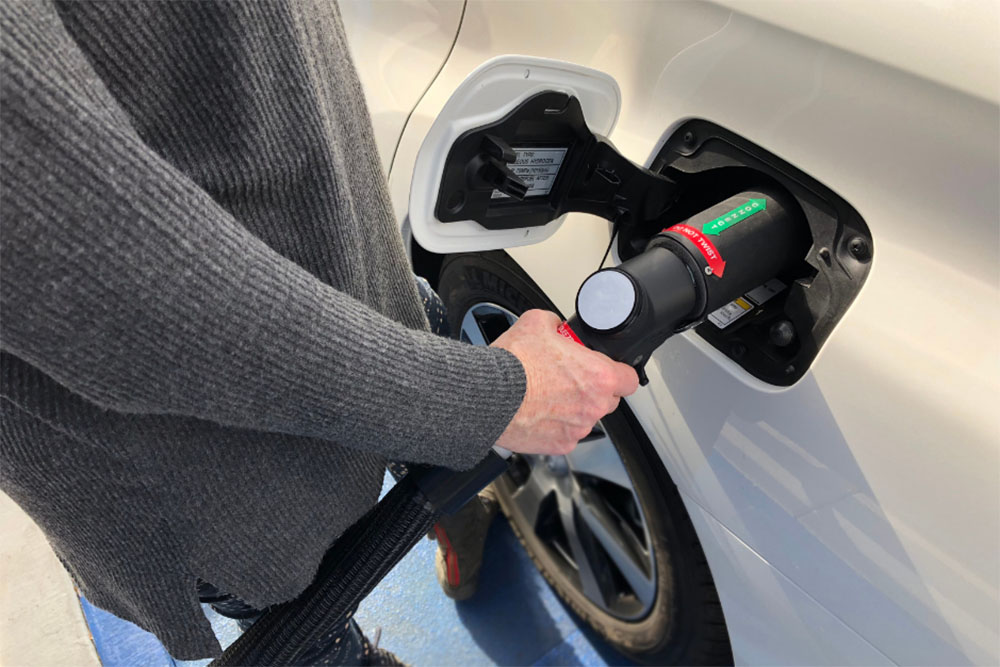 What is the sound of one hand clapping?

Yeah – heavy philosophical questions, not quite what you were looking for, right?

But in a way, it’s an appropriate metaphor for the sound of hydrogen cars. The sound of two hands clapping is loud and sharp, and well understood, because we understand it as the sound of an impact, and it’s what we’re used to.

Similarly, the sound of a regular gas or diesel engine is loud because it has lots of mechanical parts and operations, but we don’t think of it as unusual because we’re entirely used to it.

But with hydrogen fuel cells replacing noisy combustion engines – who knows what gives?

Does it still make anything like a familiar engine sound, or is it like something out of a sci-fi movie, an electric whoosh?

Or is it, perhaps most creepy of all given our learned expectations of engine noise, eerily silent, losing no efficiency to the production of sound?

Let’s take a look and a listen

First thing’s first. Obviously, hydrogen fuel cell vehicles are going to work differently to internal combustion engine (ICE)-powered cars. They don’t have the combustion to deal with, apart from anything else.

No explosions here. So you’d immediately expect a reduction in noise in hydrogen fuel cell vehicles. What’s more, while ICE engines are constantly expelling exhaust gases at a reasonably high (and therefore a fairly noisy) pressure.

Hydrogen cell cars only have water as a by-product, which can be exhausted at much less pressure, which should logically be quieter than traditional exhausts.

Again, all the immediate logic suggests that we’re in for a much quieter future on the roads when hydrogen fuel cell cars become the norm (assuming they ever do).

What about the fuel cells themselves? We know ICE engines are noisy, but are the hydrogen cells equally noisy in a different way?

Erm… no, not really. There’s no fuel burn happening in a hydrogen fuel cell, so it’s practically noise-free in and of itself.

That said, there will be some level of noise, because the hydrogen fuel cell needs other components bolted onto it, like fans and compressors.

Those aren’t exactly noise-free – but they are relatively quiet by comparison to standard ICE vehicles. Probably the easiest way to think about it is like a laptop.

The passage of electric power to fuel its actions is relatively silent, and you’ll get a little more noise when the fans kick in to cool down the system.

So, hydrogen cars sound like having a laptop drive past?

Mmm, sort of. Of course, this is still a road vehicle we’re talking about, so a laptop on wheels, maybe, with the noise of tires on road surface, and possibly the noise of some wind, contributing a little of that sci-fi movie whoosh we mentioned.

Anything with tires that moves along the road is going to report itself to your ears that way, but a hydrogen car will sound like a laptop on wheels, or more or less like a standard ICE car… without an engine.

Weirdly, if you’re in a hydrogen car, you don’t feel the car change gear when it accelerates or meets a hill.

From a sound perspective, that means not only do you not get the standard driving noise of an ICE engine, you also don’t get the changes in pitch as it struggles to do things like add extra speed or climb hills.

So what are we talking about in hardcore decibels?

Well, it’s true to say the data on that is still being collated, but initial data from the California Fuel Cell Partnership indicates that where a standard ICE car hits in the region of 70 decibels, a hydrogen car would be around 50.

That’s a dramatic drop, and it’s worth saying that the fuel cell noise is probably lower than the tire and wind noises combined in this estimation.

To drop the level much lower, you’d be looking at designs that cut wind resistance right down, and either some kind of maglev (magnetic levitation) system on smart roads, or an ultra quiet hovercraft option, to reduce the noise of tires on the road surface.

At the moment, the examples of hydrogen cars that have been built and raced on road surfaces have either sounded extremely quiet compared to ICE vehicles, or have actually given off that kind of sci-fi movie whoosh sound your imagination really wants them to.

BMW, for instance, made an experimental hydrogen car, the i8, and people who heard it – apparently without any additional effects added – said it reminded them of a TIE fighter sound from Star Wars. Than which, be honest, there’s very little cooler in vehicular sound terms.

The UK’s Riversimple Risa too has a bit of the science fiction whoosh to it, though in this case, you should probably think Men In Black when the turbo button is pressed on their car.

So much for sound while in transit, but what about the sound when you turn the key. Part of the thrum and the fun of powerful cars for over 50 years has been that initial growl of an ICE engine, the rev counter bouncing as you press the gas pedal and the engine and the exhaust giving a roar.

Yyyyyeah – not so much with a hydrogen car. When you start up a hydrogen car, you’ll hear the quiet buzz of the laptop-like engine and the slight whine of the fans and compressors, and…not a lot else.

Remember, you don’t hear or feel a difference when a hydrogen car accelerates or hits a hill, so gunning the gas pedal is not going to give you the roar you remember. It all makes for a rather more civilized, if on some level slightly less fun start-up experience.

Overall then, hydrogen cars sound much quieter than traditional gas or diesel-engine cars. Almost unnervingly quiet, but with a little whoosh of sci-fi as they pass.

Yes, there is some noise from the fuel cell and its additional components, but that rarely if ever reaches above the noise level of tires on the road and the wind passing over the car. So, what you get is pretty much the sound of a laptop on wheels, with just a little extra sci-fi swank.

We confidently predict a hydrogen car aftermarket in bespoke additional sound effects, so pedestrians will safely hear them coming, but like personalized ringtones, they’ll be customized to the user’s tastes.